The Essence of Life. - Sprunk

The beer that brought the forests down. - Logger Beer

Eat till you explode! - Marco's Bistro

Ultimate Freeroam is a multiplayer community with thousands of options to enjoy.

Racing, Deathmatch, Trucking, Derby, Building, Crafting and many other stuff.

Join us and have fun!

With hundred thousands of players, and thousands different kind of servers it makes the modification highly enjoyable. 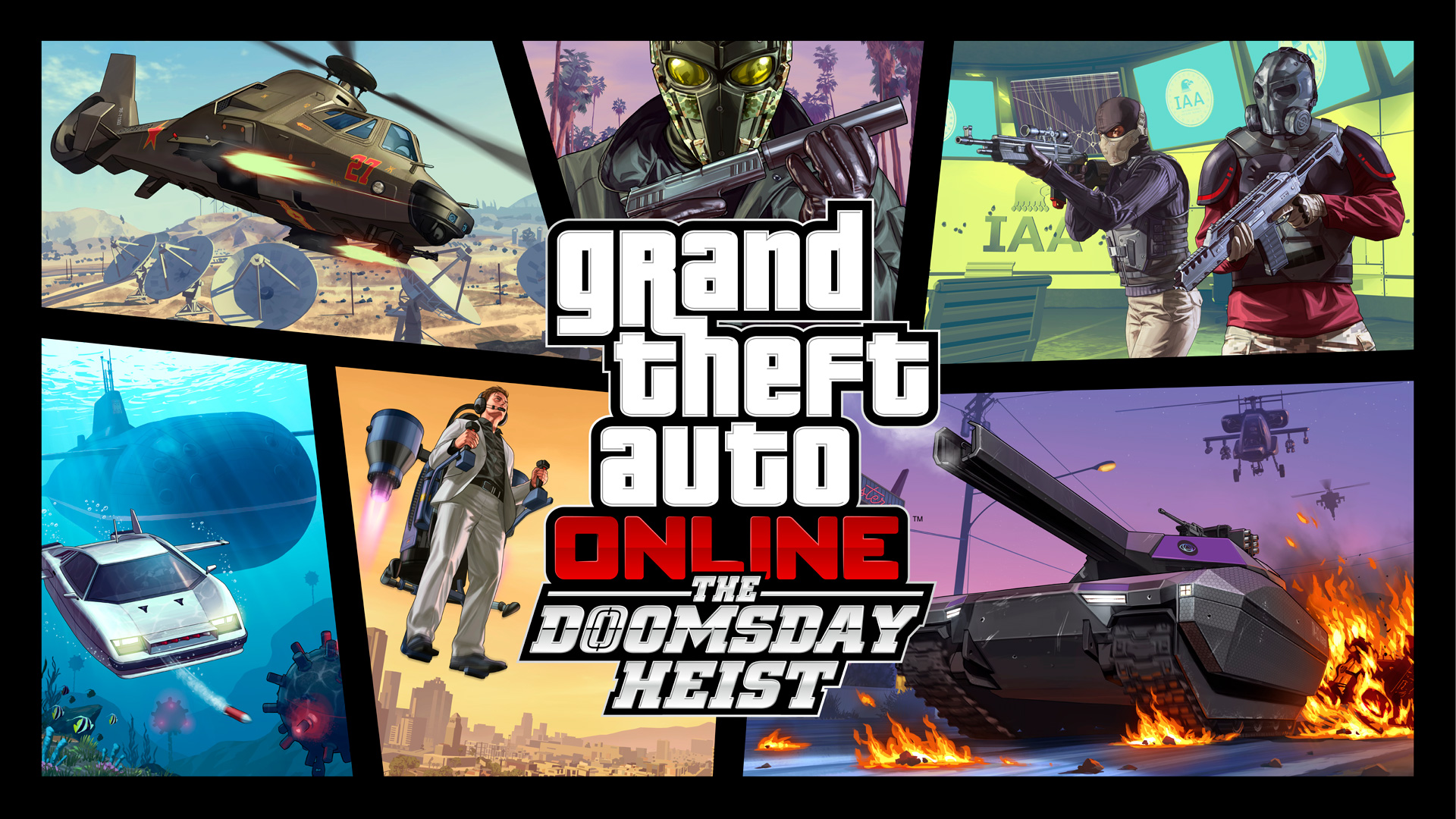 When the stakes are this high, who else can you trust to save the day but the craziest criminals ever to grace the Los Santos underworld? The risks are colossal, the enemies all but unstoppable… but the rewards are mouth-watering and a massive adrenaline spike is absolutely guaranteed. Assemble your crew for the biggest Online adventure yet, across 3 sprawling acts - The Doomsday Heist is now available to play in GTA Online.

Billionaire entrepreneur Avon Hertz and his pet neural network Cliffford have stumbled upon evidence that nefarious outside forces are working on a plan so diabolical it could end life as we know it. Somehow, Lester Crest is tasked with assembling a team deadly enough - and crazy enough - to do what it takes to bring them down. That’s where you come in. It’s going to take some luck, some firepower and some serious teamwork to take this threat head-on, assisted by Avon’s access to the latest in lethal blue-sky tactical hardware. 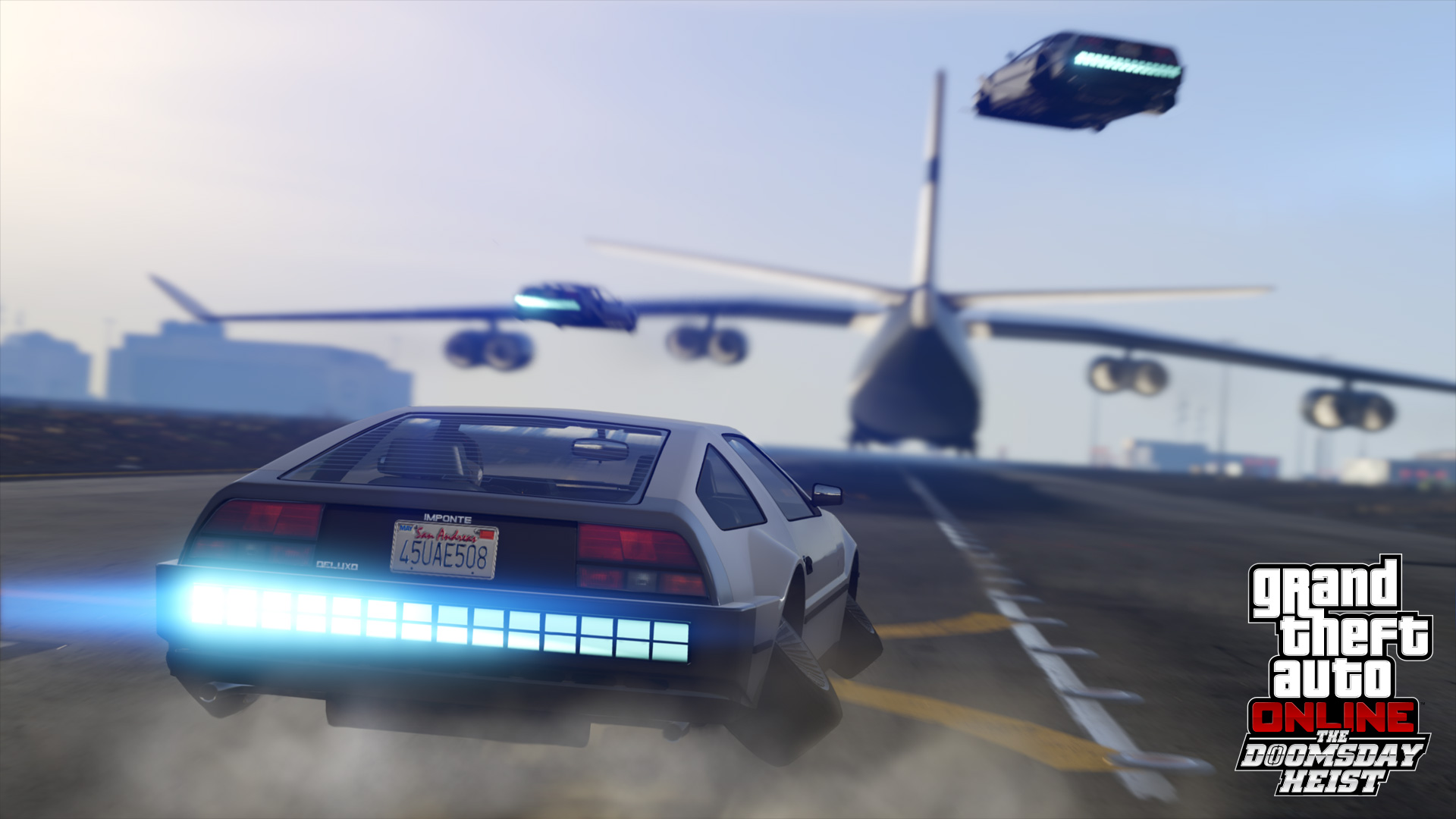 It’s time to assemble your Organization or Motorcycle Club and prepare for a new kind of war. First, one member of your crew needs to own one of the previously undisclosed IAA facilities hidden under Southern San Andreas, giving you access to the new advanced planning room where you will map out the steps to launch and complete each mission. This time, operations will run a little differently: crews of 2-4 players will now be able to work together to complete every mission.

Bigger, Deadlier and More Complex than Ever

Each of the three massive Heist acts that comprise the story of The Doomsday Heist involves negotiating multiple ruthless Freemode prep missions, tactical setup operations, and experimental weapons and vehicles - each ending with an over-the-top finale that brings a payoff big enough to comfortably share with your fellow crew members. Some missions may involve competition for resources with other crews in Freemode, and MC Presidents can even enlist additional club members, boosting your squad to up to 8 players to help secure your objective in these missions. 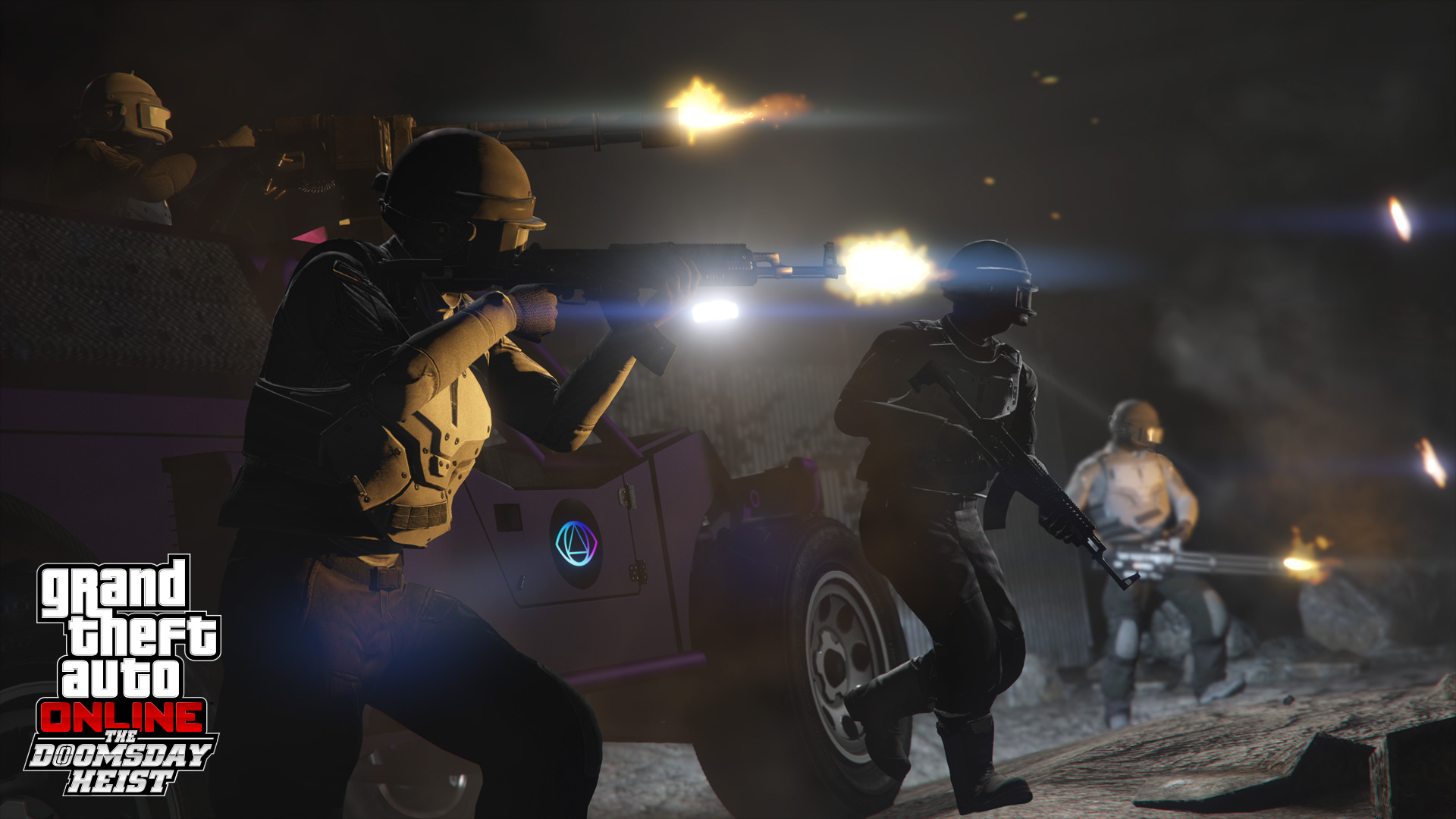 A New Set of Tools

If you’ve been drafted to prevent the end of the world, you better have access to the finest technology available. MKII upgrades are now available via the Mobile Operations Center or Avenger’s Weapon Workshop for the Pump Shotgun, Special Carbine, Marksman Rifle, Heavy Revolver, Bullpup Rifle and SNS Pistol.

The Doomsday Heist also brings access to the ultimate in offensive weaponry: from the futuristic fury of the Khanjali tank, to the long-awaited madness of the Mammoth Thruster personal jetpack, you’ll have everything you need to bring down a small army.

Speaking of small armies, purchase of the Facility includes the optional ability to have your own Strike Team on call, or an Orbital Cannon capable of immolating any patch of ground that incurs your wrath. Slow to arm and reload but devastating when deployed tactically – at the moment a gang of rivals is clustered on the same area of the map, for instance – the Orbital Cannon is less a weapon of last resort and more the ultimate revenge, served ice cold. 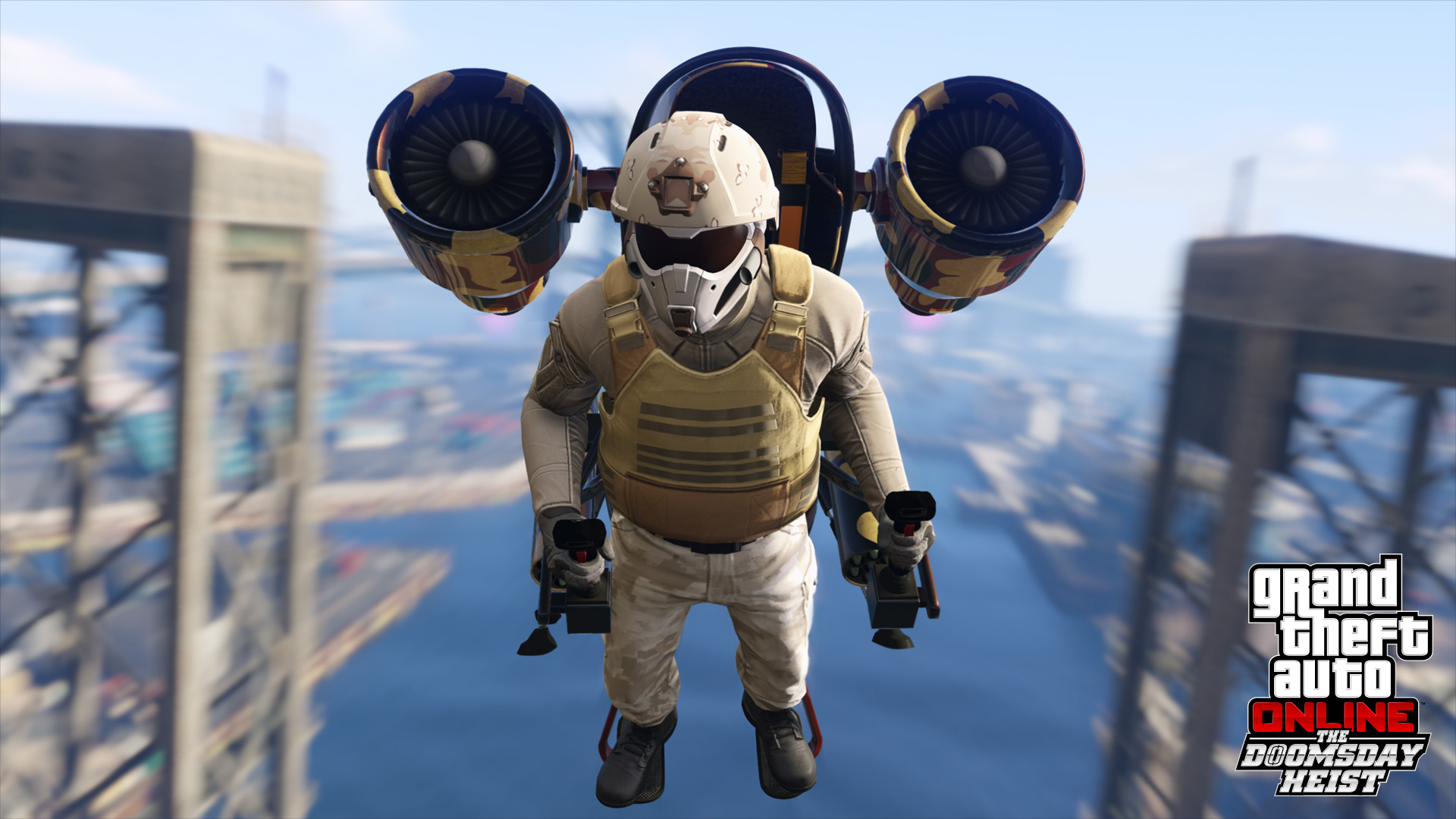 So you’re an aspiring criminal and you and your crew have been tasked with staving off an existential threat, but you need just the right vehicle. How about a vertical take-off, turreted, flying fortress/experimental weapons lab in the sky/death-spitting collateral damage producer that practically flies itself? The Avenger is all these things and more. Store it in your Facility, get it fitted out with a Vehicle Mod Shop, a Weapon Workshop, and a suite of ferocious weapon upgrades, and you’ll soon be wreaking a whole new level of havoc without ever having to land.

Ever been told the sky is the limit? Well, not anymore. It’s time to elevate your criminal empire, taking your assets and your profits in the only direction left to go: straight up. Welcome to GTA Online: Smuggler's Run.

Customizable Hangar properties are the center for your new smuggling ring, complete with a complimentary Cuban 800, optional living quarters, aircraft custom workshop, office, show floor and aircraft storage. Stock it with a fleet of lovingly personalized aircraft, take to the skies, and don’t come down until every cubic foot of Los Santos airspace has been brought under the control of a tax-exempt Air-Freight Business stretching from sea to shining sea. 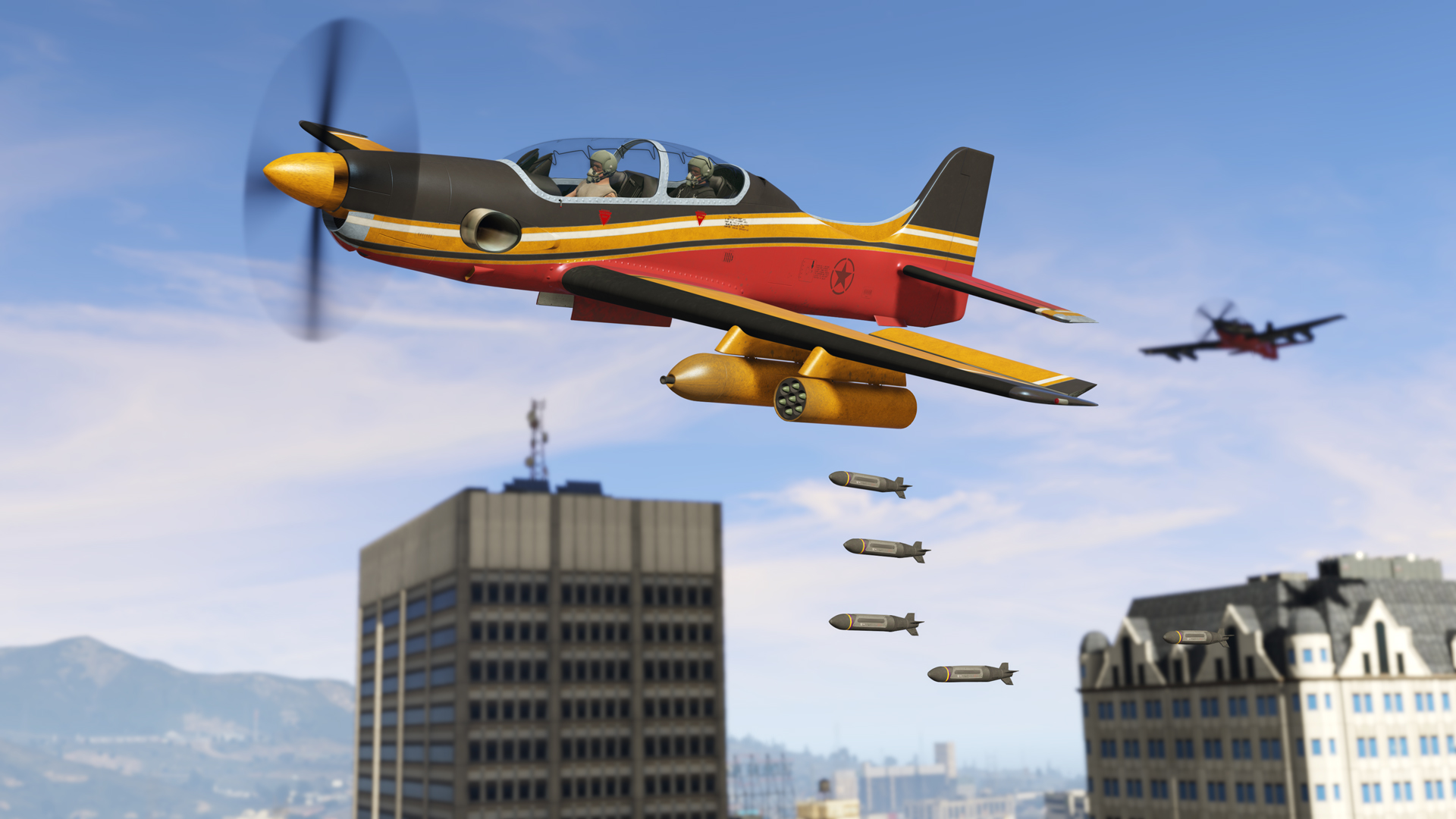 The smuggling business is full of opportunities for proactive CEOs, MC Presidents and VIPs and a brand new Hangar is just the starting point you need. So, get yourself logged into the Free Trade Shipping Co app with the help of Nervous Ron, acquire the cargo – from high demand narcotics to fine jewelry – and make the sale to eager buyers awaiting your air-dropped delivery.

SEVEN NEW AIRCRAFT
The skies above Los Santos are about to get a lot more interesting. Everything from vintage dogfighters to miniature choppers to cold war bombers are now in stock (and available at a special trade price for committed smugglers). These magnificent flying machines can be stored in your private Hangar, and customized using a range of options including engine and handling upgrades, countermeasures, liveries, weapons, bombs and more with the investment in an Aircraft Workshop. You can even drop off any aircraft in your Pegasus inventory and display (or store) them in your Hangar, allowing you to call them up as your own Personal Vehicle from the Player Interaction menu. Here's a look at all the new inventory available now at Elitás Travel and Warstock Cache & Carry:

LF-22 Starling - One moment you're on the runway, slowly inching into position, wondering what all the fuss is about. The next, you're 220 feet in the air and rising, a shrieking human speck on the front end of a blazing rocket trail headed straight for the stratosphere. The LF-22 Starling packs mounted rockets, optional homing missiles and bombs for extra punch. Available from Warstock Cache & Carry.

Mammoth Tula - Remember the kid who always had a multi-tool with him? Remember how popular he was? Well, if he had survived high school, there's only one set of keys he would have in his fanny pack: the Tula is a quad-prop monster with VTOL and water-landing capabilities, space for turrets and a bomb bay, and the capacity for JATO upgrades. Be prepared. Available from Warstock Cache & Carry. 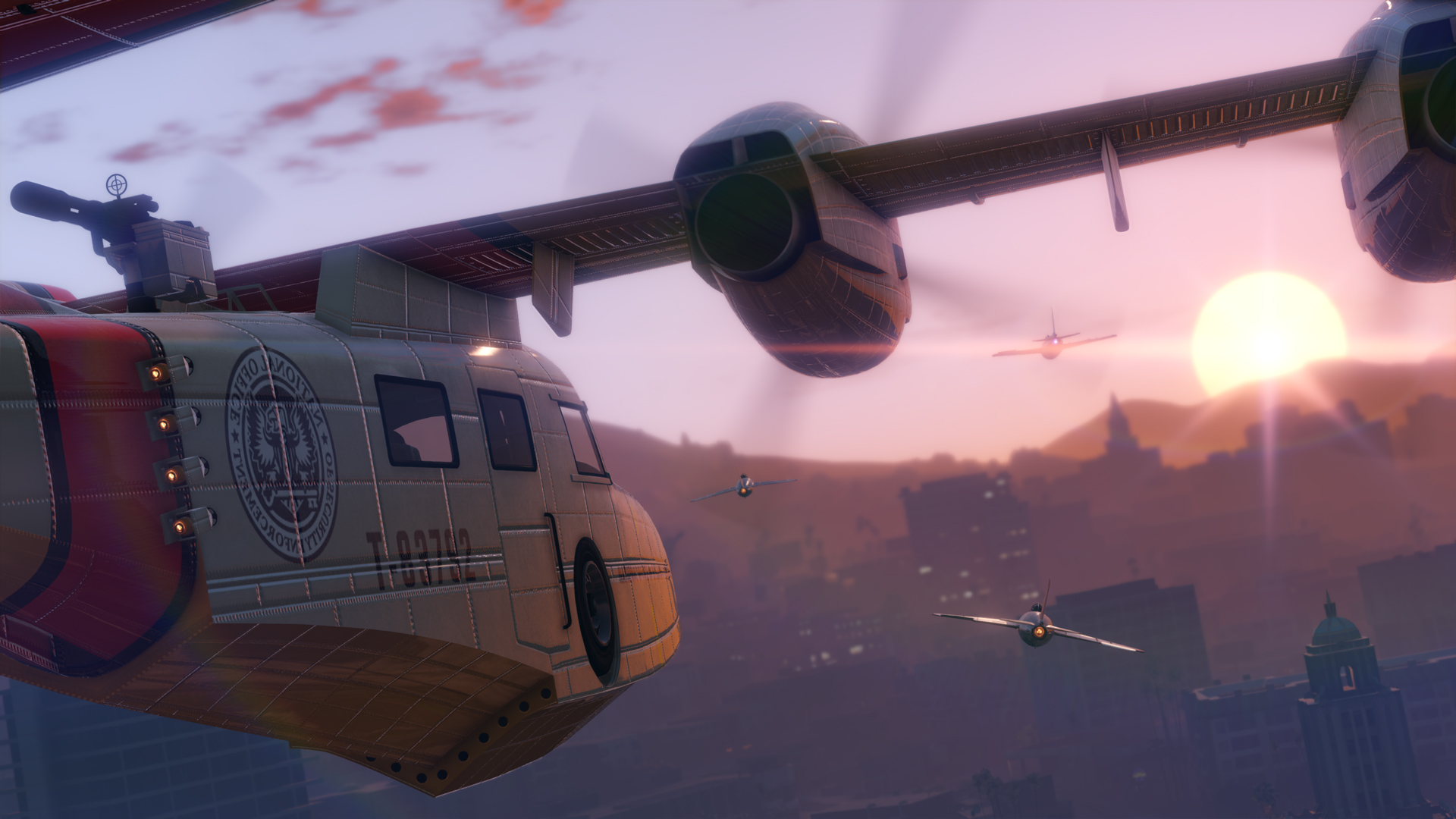 Nagasaki Havok - In the world of tactical air support, bigger is better, right? Wrong. Incredibly small and highly maneuverable, if the Havok was any smaller you’d have to stay on the ground and use a phone app to fly it. Throw the option for a machine-gun upgrade and decoy flares, and you're going into any negotiations with a serious edge. Available from Elitás Travel.

Nagasaki Ultralight - What red-blooded American hasn't gazed at an eagle as it soars through an empty sky, refined by millions of years of evolution into the epitome of aerial dexterity and lethal precision and wondered: what could be more dignified, more transcendent? Well, now you know. Available from Elitás Travel.

V-65 Molotok – The poster child for brutalist military chic, the V-65 Molotok has been reproduced in juntas and dictatorships right across the developing world, and that's not just because of the lethal efficiency of its twin nose-mounted machine guns. It's because when you look this merciless, the battle's won before you've even taken off. Available from Warstock Cache & Carry.

Western Rogue - To the casual observer, the Rogue looks like a classic, single-prop training aircraft. And that's exactly what you want them to think. Because with room for machine guns, missiles, anti-intercept countermeasures and a full-size bomb bay, you'll have those casual observers running for any available cover. Available from Warstock Cache & Carry.


2016 is over and here is our small video from christmas! Enjoy :D


Here is the next small video from UF AngelZ. We hope you like it :D